We congratulate Elke and Andreas Hartleif on their 25th anniversary at VEKA. Both have shaped VEKA in many ways and thereby contributed to the success story of the VEKA Group.

In 1996, Heinrich Laumann made a groundbreaking decision. The founder of VEKA AG brought his son-in-law Andreas Hartleif and his daughter Elke Hartleif into the company. On July 1, 1996, Andreas Hartleif joined the systems provider from Sendenhorst as Head of Corporate Planning and Auditing. On October 1 of the same year, his wife Elke followed as HR Manager. This year they are both celebrating 25 years of service - Andreas Hartleif as Chairman of the Board, Elke Hartleif as Chief Human Resources Officer of the VEKA Group.

When they started at VEKA, some key decisions for the future had to be made:
"The core issue was, if VEKA as a family business was properly positioned for further development and expansion in the increasingly competitive environment. Or whether it was unavoidable to open up to external investors and possibly go public," Andreas Hartleif recalls. The family and the Board of VEKA AG, of which he and his wife have been members since 1997, decided to continue on the path as an independent family company.

Responsibility and freedom of choice

The entrepreneurial duo has continued the success story, which started under Heinrich Laumann, with a great deal of passion. The one-billion sales mark has long been exceeded, growth prospects are good and the equity ratio is excellent. This means, that essential prerequisites for VEKA are in place, in order to continue to operate with unrestricted personal responsibility and freedom of choice. The impressive development of VEKA into a global market leader is based not only on smart entrepreneurial decisions, but also on the continuity and reliability of the company's management, the sense of responsibility of its employees and an appreciative corporate culture. "Particularly in our eventful times, these are decisive entrepreneurial values that create trust and provide security," emphasizes Elke Hartleif, who exemplifies this with her husband Andreas.

Hartleif pushed the continuous development of the VEKA Group - at the Sendenhorst site as well as worldwide - with the necessary sense of proportion. This is represented by the successful acquisition of the German PVC window system provider GEALAN in 2014. Thanks to the courage of Andreas Hartleif to occupy and develop innovative ideas, the company was able to access important technologies in window construction: With the spin-off of celotec GmbH & Co. KG in 2018, VEKA concentrated its expertise in surface finishing in a high-performance sister company. In the subsidiary DBS (Digital Building Solutions), digital services related to the building element window have been bundled for the entire Group since 2020.

Commitment to the entire industry

In addition to his entrepreneurial success, the Chairman of VEKA's Board of Management has always had the concerns of the entire industry in mind: For example, the 54-year-old is an advocate of material-based PVC recycling, which he promoted as spokesman for the advisory board of the window recycling initiative Rewindo. Thanks to his decisive commitment, he succeeded in closing ranks with the entire industry. Today there is an almost seamless recycling network, to which VEKA, with its subsidiary VEKA Umwelttechnik and the entire Recycling Division, makes a considerable contribution. As President of EPPA, Hartleif helped the European industry association to establish itself as a strong organization in Brussels and as a valued contact for trade associations and the important political bodies of the European Union.

High identification with the company

Elke Hartleif has driven many changes in the HR area - first as Head of Human Resources and from 1997 onwards as Chief Human Resources Officer for the entire VEKA Group. The fact that employee satisfaction is high and fluctuation is low is an essential element for the company's success. On her initiative, among other things, the regular structured 180-degree employee interview (feedback from and for the supervisor and his employees) was introduced and the management development program was massively expanded.

Offers for all employees - from career starters to seasoned managers - ensure qualifications and quality at a high level. Demographic developments pose the greatest challenges in the coming years. To secure the skilled workforce of tomorrow, a comprehensive training program has been developed for the company headquarters in Sendenhorst: Around 100 young people are being intensively supported and prepared for their future tasks in ten apprenticeships and two dual study programs.

A major concern for Elke Hartleif, who has three children of her own with her husband Andreas, is the compatibility of family and career. "We humans are motivated by nature. It is important to create conditions in which each individual can act on his or her own responsibility," is one of the principles for Elke and Andreas Hartleif. "If we then have fun and the motivation is noticable, the best conditions are created.“

The Hartleifs demonstrate continuity and reliability not only in business matters, but also in their social commitment. Active as tennis players and amateur musicians themselves, they support the social, cultural and sporting life in their home region. Social responsibility is also reflected in the values, that VEKA lives and represents with Andreas and Elke Hartleif. Appreciation, reliability, courage and trust are the basic values expressed in the VEKA Group's mission statement: "We care" commits the company to dedicated, social and future-friendly actions. Both emphasize:
"We are and will remain the trustworthy and responsible partner for our employees and customers. And above all, we are and will remain: a family business.“ 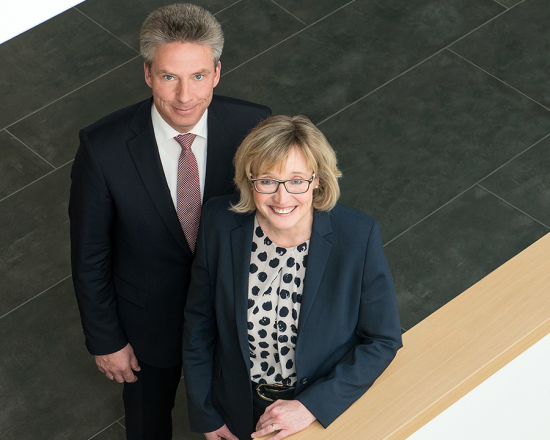