No participation at Fensterbau Frontale & Polyclose in 2022

The VEKA Aktiengesellschaft, with its two system houses VEKA and GEALAN, will refrain from attending international trade fair events in spring 2022.

In addition to Fensterbau Frontale 2022, which is being held at the end of March, this decision will also affect the Polyclose in Gent. VEKA and GEALAN made this decision jointly, after intensive internal discussions and after weighing up all the pros and cons.

“We definitely didn’t take this step lightly, but against the backdrop of the uncertain overall situation and the worsening developments surrounding the spread of another coronavirus mutation, we wanted to have clarity in both companies at an early stage as far as planning for the coming year was concerned”, explain VEKA Aktiengesellschaft CEO Andreas Hartleif and GEALAN’s Managing Director Ivica Maurović.

Health and safety are the priority

Furthermore, the company sees itself as responsible for putting the health and safety of its employees, customers and business partners above all other interests. “This is an absolute priority for us. For this reason, we will only exhibit again in Nuremberg when the overall environment makes it possible to take part in a way that approaches the 2018 event”, stress Hartleif and Maurović.

Their decision is also based on the large number of discussions they have had with customers, other industry players and the Group’s international subsidiaries. “Both domestically and in our neighbouring European markets, we’ve noticed a marked reluctance in many places to attend fairs. To be sure, many of our partners from the window construction industry would like to have personal interaction and direct contact with us again, but at the same time considerable doubts are being raised as to whether this can take place within the usual framework”, Maurović continues.

The case is different again for visitors from abroad and outside the EU. This group of visitors has always been an integral part of the GEALAN and VEKA booths in previous years and they have enjoyed making the trip to Germany every two years. “In this case, however, we’ve already received clear signals up to this point that our visitors from North and South America will not be coming and the usually very strong Russian delegation has already cancelled its participation as well”, explains Hartleif.

At the same time, supporting partners from the window construction industry with products that are in line with market requirements and with up-to-date services is the focus of efforts at both companies. GEALAN’s stated aim was to offer its national and international customers a fair experience that would come as close as possible to the normality that has characterised recent events. “Precisely this is what we see as being unworkable in the current situation. The personal dialogue, exchange regarding new products and innovations as well as the informal aspect in the evenings – all that makes for a successful fair participation, which we don’t yet see as a possibility for March 2022”, adds Maurović.

They are well aware of the consequences of this decision. Nevertheless, both system houses see their joint decision as the only right step at this point in time. “After sticking with our participation at Nuremberg until the very end two years ago, we wanted to avoid a similar scenario for the coming year at all costs, as well as the associated negative consequences for all companies involved in the implementation”, explains Hartleif. It’s also a clear signal that the health and safety of its employees and partners is being placed above all other interests, because, Maurović concludes, no concept for large events that has been tested in the past can offer 100% safety.

However, should the option arise to postpone the fair to a later date due to potential official guidelines, a different situation would arise from the point of view of VEKA and GEALAN, which would then need to be reassessed. 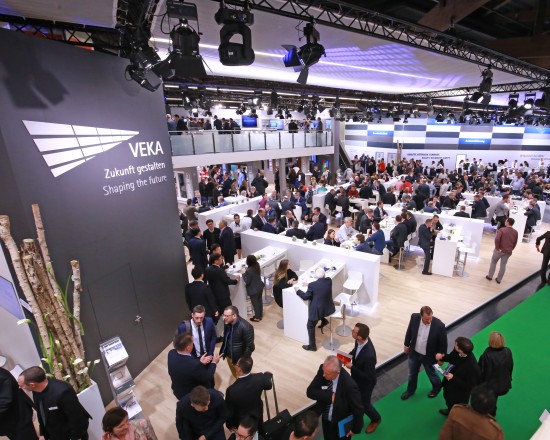 In 2018 the VEKA AG booth at Fensterbau Frontale in Nuremberg was very well visited.